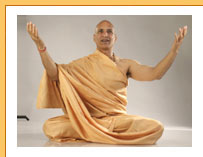 An eye capturing and heart touching handsome young boy of 18 years with fair complexion, strong muscular built, always cheerful & glowing face and deep bright eyes, abundant energy, self confidence, leadership skill, wonderful art of oratory with offers of film industry, class one jobs in police, army and in private sector and other worldly attractions all around BUT… clear vision.

This young boy was touched with the paining heart, self confidence, courage to accept and stand for truth, revolutionary life, selfless service and truth pricked words of Swami Dayanand Saraswati and Swami Vivekanand, Kabir and Nanak Dev. Their lives made him to decide to stay above and make the best use of his life by leaving all such attractions aside and serve the humanity as a servant of Divine.

At so early an age he became a popular teacher among young generation always surrounded by youth. Youth felt proud to come in his association and found a beam of light in the clouds of confusions and darkness. The name of this young Bharat Bhushan became synonym of 'Guru ji' as youth from all classes and faiths were at his home or around him where ever he went for solution of their problems, quarries and curiosity.

It was his life style that attracted the youth from being spoiled and understands the meaning of true health, strength, beauty, religion, social service, patriotism and importance of coexistence and spiritualism. His home became a popular visiting centre for Hindus, Muslims, Christians and all other faiths. May it be Diwali, Eid, Xmas day, Independence Day, Republic Day or the incarnation days of Nanak Dev, Kabir, Raidas or Balmiki or sacrifice days of our great martyrs, his home was always crowded with people of different faiths who were there to celebrate these occasions with social, patriotic, spiritual color. His home became the only place where people enjoyed the literary & cultural activities, social and national discussions along with spiritual living with liberty to continue their religious faiths, where youth of different faiths did never hesitate in celebrating holy Yajan, Holi, Eid, Diwali, and Xmas day all together.

Life of Gurudev Bharat Bhushan ji, is a living example of the high tradition of great souls traveling this planet when ever humanity is in great need of such revolutionary seers to spark and flash light of true knowledge to prevailing darkness of ignorance and sorrows in society.

Guruji is the symbol of perfection in all spheres of life weather it be academic education, sports, co curricular activities, moral values, literature, speech, poetry, music, relationships, journalism, social work, spirituality, ayurveda and bodybuilding as he is the only vegetarian Mr. India as well.

But the aim of his life was pretty clear from the very beginning. He is a mentor who has changed the lives of many others. He is just like Paras that converts everything in gold which comes in contact with him.

The only 'Padma Shri' recipient in the field of yog in 1991 by the then President of India Shri R. Venkatraman and the explorer of the Indian spiritual science of Yog in more than 60 countries YOG GURU 'PADMA SHRI' BHARAT BHUSHAN behaves just like an ordinary man when he caress his cow, when he waters the plants of his ashram and when he shares his wonderful moments of life with his students and is always surrounded by youth around him.
» Top 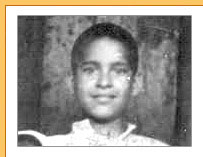 Incarnated on 30th April 1952 this divine soul carried yog from his previous birth with him and from his early childhood started sharing his previous birth's knowledge with all those around him and at the tender age of 6 this child could recite Yog Sutras of Maharishi Patanjali and complete Yog Darshan was the subject of his choice at this tender age.

As told by Guruji's father, he used to wake up at 4 a.m. during his childhood and even his father could never understand why this child wakes up at 4 without any instructions and start doing some kind of exercises?

At the age of 9, one winter morning guruji's father took him to the 'Company Garden' near their house and this small child saw a few people practicing yog there. He also started following them. The instructor was very impressed with the tough postures and personality of this young child. He introduced this boy to his whole class and said 'This is the true personality of a Yogi'. He advised young Bharat Bhushan to start practicing Bhastrika Pranayam to grow his inner powers. This small child replied very innocently, "No I'll not practice it because my cow is not giving milk these days." The instructor as well as Guruji's father - both were amazed to hear this reply. Guruji's father realized that his child must have been a yogi in his previous birth when after few years he read some where, "One should never practice Bhastrika without milk." and also when he found out that even at the age of 6 this child could recite Yog Sutras of Maharishi Patanjali and complete Yog Darshan was the subject of his choice at this tender age.
» Top 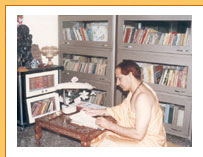 Guruji inherited yog from his previous birth, he doesn't remember any formal schooling in yog and so his parents, as told earlier his father told that from the very beginning of life he noticed his unusual life style that differed him form normal children. He used to wake up at 4 and practice eight fold yog.

But from the very beginning Swami Dayanad Saraswati and Swami Vivekanand were his role models and he still adore them as his gurus. His visit to Shri Ramkrishan Paramhans's (Gurudev of Swami Vivekanand) shrine at Dakshineshwar is an unforgettable divine experience in his life. He was touched deeply with famous Chicago address of Swami Vivekanand and to his surprise he received first invitation for foreign yog trip from Chicago only.

He believes the Vedic way of yogic living and the teachings of Yogi Mahershi Dayanand are the only remedy to all social and individual human problems today. "I didn't accept the path of yog for any worldly gain but look at all worldly gains if they are helpful in yogic gains as yog itself is the ultimate gain", says Yog Guru Bharat Bhushan ji.
» Top 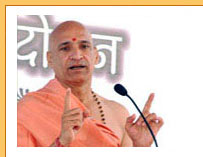 Guru ji establishes that Vedanta is the essence of Vedas the ultimate knowledge to be understood and followed through Yogic discipline that leads to self realization and the blissful state of being. It is not for a particular sect or caste but for entire humanity. 'Vedantonaam Upnishad Pramanam'. Vedanta and Upnishad at the root are one. Just to make this ultimate knowledge easy and available even to common man Smritis, Puran were introduced where ethics of spiritualism are introduced through incidents and easy stories of historical characters but in case of confrontation for fundamentals of spiritualism all followers of Vedas are bound to rely on Vedanta or Upanishads only as the religious facts in this holy text are unchangeable.

"Life of Guru ji is not at all for his own, he is incarnated for the betterment of society and he has always taught us to at least do good to others once a day" tells the student of Guruji.

Guruji believes that this society has given him a lot and now its his turn. He always ask his students "What is your contribution in making this world a more beautiful and better place?"

He has served the humanity through yog camps and sessions for better and longer living, for self mastery, saved innumerable lives through regular live blood bank, made the youth more powerful and strong through gymnasiums, trained the youth about where to use their power and strength and where not and has given a new direction to the youth through Sanskar Shiksha Abhiyaan and educational institutes, helped in maintaining the balance of nature and in fighting against the major problems like global warming through yagya shala, invoked the feeling of patriotism and the real love which is the love for Nation through Rashtra Vandana Mission, made the youth aware of the Indian cultural heritage through lecture demonstrations of Indian Classical Dance and Music at different educational institutes, yog training Programs for administrative institutes, police academies, military and paramilitary forces, educational assemblies, prisoners, mentally retarded & diseased people.